My project starting fall of 2020 will be converting a classic 100 year old wooden motorboat from a diesel powered engine to electric power.

I've been considering a project like this for a while, and the Coronavirus winter of 2020 seems like a good time to start.
I'm Swedish but writing this blog in English, in the hope that it will be helpful to a wider audience than if I wrote in Swedish (forgive me, Swedes!). But some links will point to Swedish web pages (forgive me, non-Swedes!).

Boats use more power than cars, because of the need to push a lot of heavy water aside to move. My first step was to investigate if a reasonable combination of speed, range and cost could be achieved.

Twenty years ago, two friends and I owned a boat called Koggen, a wooden motorboat with inboard engine. We used her for both longer trips in the Stockholm archipelago and for shorter 'picnic' tours around the city.

The goal of this project is to have a boat for day trips and picnic style excursions, but not longer trips. As power increases very quickly with increasing speed, high speed is not a priority.

The power required to propel a displacement boat (as opposed to a planing or hydrofoil boat) through the water increases very quickly with increasing speed.

Björn Omér, who did also did an electrification of a motorboat (replacing a 13 horsepower diesel engine with a 5 kW electric motor), posted very interesting data showing the power vs speed for his boat, which I've plotted here:

These speeds are below the hull speed, and going above the hull speed one would expect an even faster increase in power required.

In terms of range, this means that with a given battery capacity, you will get further the slower you go.

I wanted a boat with an efficient hull, one that requires little energy to propel it through it the water. I started looking at the motorboats designed by Carl Gustav (CG) Pettersson, which I find beautiful. When they were designed around 1910-1940, common engines weren't very powerful, so hulls needed to be efficient.

In September 2020, I bought Solo (photo at the top of this blog entry), a boat in the style of CG Pettersson, and possibly designed by him. Solo was built in 1920, is 7.2 meters long and 1.75 meters wide. I found a very similar design (image below, might be the actual blueprint) by CG Petterson for the boat here (The plan is missing the windows, but they may have been added afterwards). 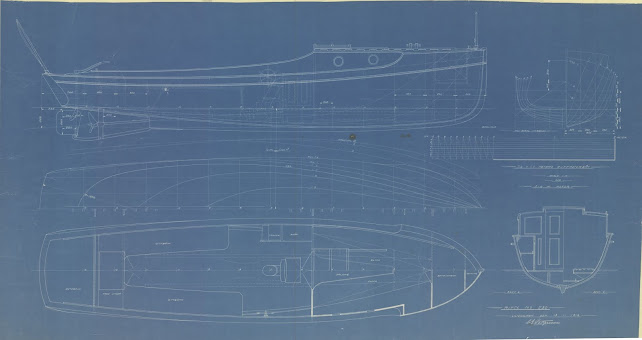 The previous owner put in a Yanmar GM-3 20 horsepower (hp) 3 cylinder diesel engine to replace an Albin O-21 gasoline engine, which is rated at 12 horse power. He hypothesized that the boat may initially have had an engine called "Solo", which was available when the boat was built, with models between 2 and 10 hp.

In my opinion, the diesel engine is very physically large for the boat and makes it difficult to move around in the boat. And it makes a lot of noise. I look forward to removing it.

The Plan and Main Components

Judging from data from other projects, I think I will be able to travel at about 4 knots using about 1 kilowatt (kW) of power. 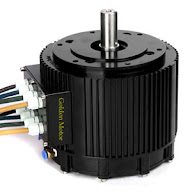 The 12 hp of the previous O-21 engine is equivalent to about 9 kW. But I think there will be some power lost in the inefficiencies of the transmission (forward/reverse).

I'm unsure if the motor will need cooling, so I'll buy the variant with built in support for attaching liquid cooling.

The motor would be controlled by a Kelly Controllers KLS-7275H controller. It can handle up to 200 ampères (A) and 25% over the nominal 72 volts (V). The maximum draw of the motor is 194 A, so it's a good match. It's available with a CAN-bus interface, which could be me interesting to monitor motor currents. 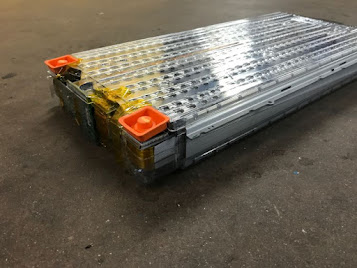 In terms of batteries, my plan is to buy three used Tesla battery modules from Model S cars. They have 5.3 kWh capacity each for a total of about 16 kWh. To get a long life out of the batteries, one should only use about 80% of their capacity (not charge them over 90% or discharge them to under 10% capacity) which would yield a usable energy of about 13 kWh.

I've seen them for sale locally for about 7 000 SEK (€674 each). 3 modules in series will give a voltage of between 55.8 and 74.7 volts, depending on the charge in the batteries. Maximum current at 10 kW would be around 180 Amps, and the Tesla batteries are said to handle over 200 amps without needing cooling.

13 kWh would give me 13 hours of runtime at 1 kW, and a range of 94 km one way, or 47 km away and the same back. This seems like reasonable performance for me.

The Tesla battery modules come with Battery Management System (BMS) boards that can measure and balance the groups of cells that make up the module. This board has been reverse engineered, and a simple micro controller system like an Arduino or a Raspberry Pi should be able to communicate with the boards over a type of serial connection. This is really cool, because hacking software myself saves me from buying an expensive BMS system like Orion BMS.

The micro controller could then control the charger, and disconnect the charger or load if the battery current, voltage or temperature goes out of a safe range.

A 1.8 kW battery charger will charge the battery pack from empty to full in just over 7 hours. Acceptable.

The motor specification mentions a speed of about 3 800 revolutions per minute (RPM) at max power output. The current transmissions decreases the engine's approximately 2 800 RPM by 3.2 times to 875 RPM for the propeller at max speed (about 6.5-7 knots). I would like a reduction of about 4 times from the electric motor to the propeller shaft.

I think the most common way to accomplish this (which also seems relatively simple and expensive) is to use a belt drive, with a bigger wheel on the propeller shaft and smaller wheel on the motor. The larger wheel would have to have 4 times the diameter of the smaller one to get the optimal gear ratio. I have yet to measure if that will fit.

The Budget for the Main Components (in Swedish Krona, SEK)

I realize there will be many other costs on top of this, and this is an initial ball-pack estimate.

Please give me feedback on the component list! Ideally before I order anything ;-)

I'd love to buy individual solar cells and cover the deck in custom solar panels that can charge the batteries.

If you're interested in sharing the work and enjoyment of the boat, let me know! The boat and I live southwest of Stockholm, in Mälarhöjden / Sätra.

Or if you just have feedback and comments, please let me know!

I have not found much information about this project. Apparently the boat was for sale in 2016.

Swedish video blog about replacing a sailboat's inboard engine to an electric motor.

Swedish blog about putting an electric engine in a motorboat by Björn Omér.

A video blog about a couple sailing the world in a boat with an electric motor, and their work on the boat and motor.

Popular posts from this blog 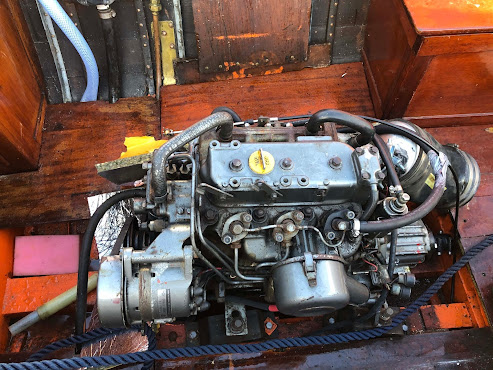 How do you lift a 130 kg engine out of a boat? I'd never handled a combustion engine before, and wasn't sure how I'd go about getting it out of the boat. I have a 20 hp Yanmar GM-3 diesel engine, weighing about 130 kg dry (more with oil). I've seen engines in ads resting on pallets, but I don't know how regular people normally move them around. My original plan was to use the mast crane to lift the engine, but I didn't have time to do that before taking the boat out of the water for the winter. Plan B was to ask the boat wharf to use their tractor to help me, but they didn't want to (they didn't have the administration set up to charge individual members for help). Then I spent some time building a simple, temporary "boat house" out of lumber scaffolding covered with a tarp. Plan C was to use lift the engine, hanging it from the wooden scaffolding, then pull out the boat (which is on a boat trailer), lower the engine onto a movable trolley, mov
Read more

Solo - Electrifying a Motorboat from 1920